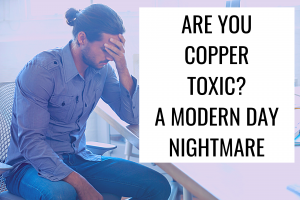 Do you know anyone who suffers from headaches, fatigue, insomnia, depression, skin rashes, spaciness or detachment, learning disorders or premenstrual syndrome?  These can be symptoms of a copper imbalance – an extremely common nutritional imbalance.

Often overlooked.  Copper problems are generally missed, or diagnosed as something else, by all types of doctors.  The reasons for this are:

1. Most doctors – even holistic and natural doctors – are not familiar with copper imbalance.

2. It is not easy to detect.  Blood and urine tests are usually not helpful to identify copper imbalances.  Identifying it on a hair analysis is also tricky because you cannot judge by the copper level on the test.

3. If a doctor finds it, very few of them know how to correct it properly.  This again applies to natural and holistic doctors as well as conventional ones.

Copper is an essential trace mineral that is vitally important for both physical and mental health.  It has been studied for years, including at government laboratories.  However, its importance for health is still largely unappreciated.  The following article is an introduction to the large subject of copper imbalance.  The author is deeply indebted to Dr. Paul C. Eck, an avid copper researcher.

COPPER’S ROLE IN THE BODY

Copper has a number of important functions in the human body.  The problem usually occurs when there is too much of it in the soft tissues of the body.  Here are some of the important roles of copper:

Imbalances can contribute to osteoporosis, bone spurs, and almost all conditions of the skin, hair and nails.  Others symptoms related to connective tissue include most cardiovascular problems, tendon and ligament conditions, scoliosis, and other skeletal and structural imbalances as well.

2. Energy production in the cells.  Copper is needed in the final steps of the Krebs energy cycle called the electron transport system.  This is where most of our cellular energy is produced.  Any problem here causes fatigue, depression and other imbalances related to low energy.

3. Immune Response.  Copper must remain in balance with zinc.  When imbalances occur, one is more prone to all infections, in particular fungal and yeast infections that are so common today.  For example, most people have some intestinal yeast if they eat sugars and most people have chronic sinus infections if they have common symptoms such as post-nasal drip and others.

4. The glandular system, particularly the thyroid and adrenal glands. The thyroid gland is extremely sensitive to copper. Common conditions associated with copper imbalance include hypothyroidism and often Hashimoto’s disease.  These go away fairly easily on a properly designed nutritional balancing program.  Taking thyroid hormones is not required.

Copper is also associated with some cases of Grave’s disease or hyperthyroidism.  This also his goes away with a properly designed nutritional balancing program.  Drugs may be needed temporarily to control the symptoms.  Surgery or radioactive iodine treatment (RAI) are drastic and rarely, if ever needed, in my experience so far.

5. Reproductive system. Copper is closely related to estrogen metabolism, and is required for women’s fertility and to maintain pregnancy.  Imbalance can cause every conceivable female organ-related difficulty such as premenstrual syndrome, ovarian cysts, infertility, miscarriages, sexual dysfunctions and more.  It affects men less than women in this area, but it may affect men’s potency and sexual drive as well as that of women.

6. Nervous system.  Copper stimulates production of the neurotransmitters epinephrine, norepinephrine and dopamine.  It is also required for monoamine oxidase, an enzyme related to serotonin production.  As a result, copper is involved deeply with all aspects of the central nervous system.  Copper imbalances are highly associated with most psychological, emotional and often neurological conditions.  These include memory loss, especially in young people, depression, anxiety, bipolar disorder, schizophrenia and others discussed below.

It is possible for a person to become copper-toxic, copper-deficient or to have a condition called biounavailable copper.  The first two of these are fairly easy to understand.  Copper is found in certain foods in greater quantity such as meats, eggs, poultry, nuts, seeds and grains.  Other foods are quite low in copper such as fruits, in particular.  Others that tend to be low are vegetables and some nuts and grains.

Refined food diets are low in copper in many cases.  Also, some, especially children, need much more copper than others. This has to do mainly with their metabolic type or body chemistry.  Fast oxidizers need more copper while slow oxidizers often have too much.  Those who we find are fast oxidizers require a lot more copper.  This is a technical area, but it is an observation that holds true in most all cases.

Slow oxidizers often have excessive copper in their bodies.  Thus they are far more prone to copper imbalance of this nature. To read more about this technical aspect of copper that is very important for practitioners, read Fast, Slow and Mixed Oxidation on this website.

What is biounavailable copper?  In this very common situation, copper is present in excess in the body, but it cannot be utilized well.  The reason it occurs is that minerals such as copper must be bound and transported within the body.

Biounavailability often occurs due to a deficiency of the copper-binding proteins, ceruloplasmin or metallothionein. Without sufficient binding proteins, unbound copper may circulate freely in the body, where it may accumulate primarily in the liver, brain and female organs.

Each mineral has “target organs” where it tends to build up.   The places where copper accumulates are the liver first, then the brain and the reproductive organs.  Copper may affect any organ or system of the body.  However, it usually affects about four or five major systems of the body.  These are the nervous system, the female and male reproductive system, connective tissues such as hair, skin and nails and organs like the liver.  Let us discuss each of these in detail.</p